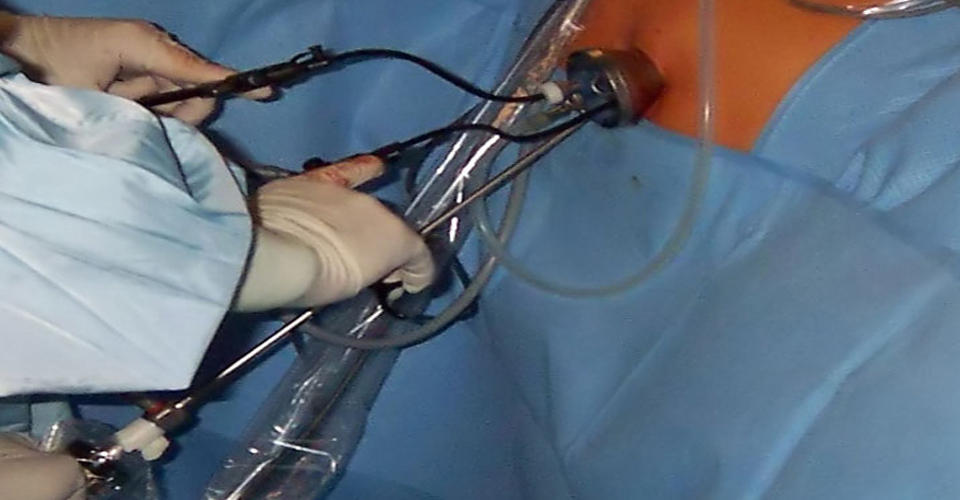 Endourology refers to a specific specialty area in urology in which small internal endoscopes and instrumentation are used to see into the urinary tract and perform surgery. Urology is a surgical specialty which deals with diseases of the male and female urinary tract and the male reproductive organs. Although urology technically is a "surgical specialty," a urologist must be knowledgeable in other areas including internal medicine, pediatrics, and gynecology because of the wide variety of clinical problems that a urologist deals with. 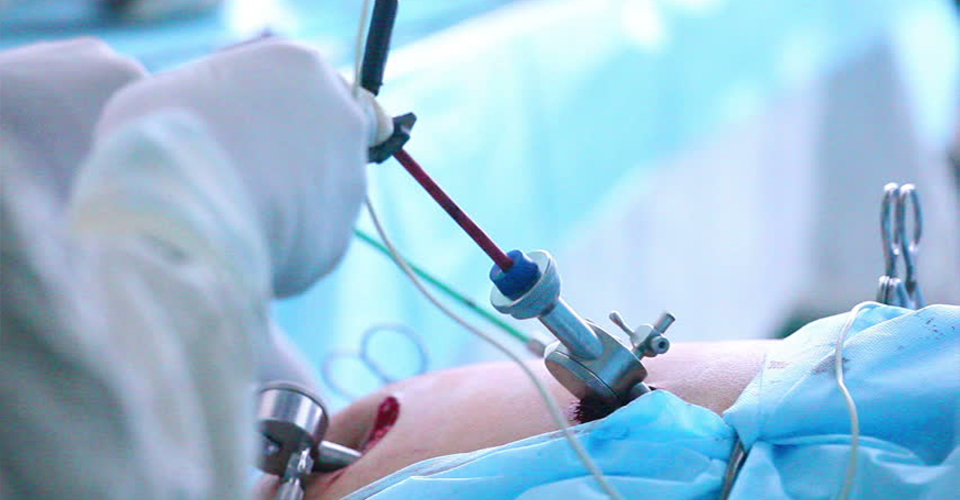 Laparoscopy is usually performed through a small (1 centimeter) incision into the belly button with the patient under general anesthesia in the operating room. A camera is mounted to a long tube about as big around as one's first finger, which is placed into the incision in the belly button and into the abdominal cavity. Once inside carbon dioxide gas is used to expand the abdominal cavity so the internal organs can be visualized. The gynecologist either looks through the tube, or, more commonly, looks at a video monitor via the attached camera. A careful survey is made of the liver, appendix, the top layer of intestines, bladder, kidney tubes (ureters), and the gynecologic organs. Specifically, the gynecologic surgeon is able to fully visualize the uterus (womb), ovaries, fallopian tubes, rectum, and the bottom part of the cervix (the opening to the uterus) called the cul-de-sac. As one might imagine, this technique allows gynecologists to diagnose a large variety of important medical conditions.

Laparoscopy reduces pain, blood loss, scars and recovery time. During the procedure, a thin needle is placed into the abdomen through which carbon dioxide gas is introduced to inflate the abdominal cavity, giving the surgeon visibility and space to work. Surgeons make two to five dime-sized incisions into which they inserting hollow tubes called trocars. A specialized fiberoptic telescope with a video camera, called a laparoscope, is inserted through one of the trocars, allowing the surgeon to see inside the abdomen via a television monitor. The trocars are also used as paths for slender surgical instruments, and aid in the removal of cancerous growths and organs. In hand-assisted laparoscopy, a slightly larger incision allows the surgeon to insert a hand inside the abdomen to perform more complex surgery. 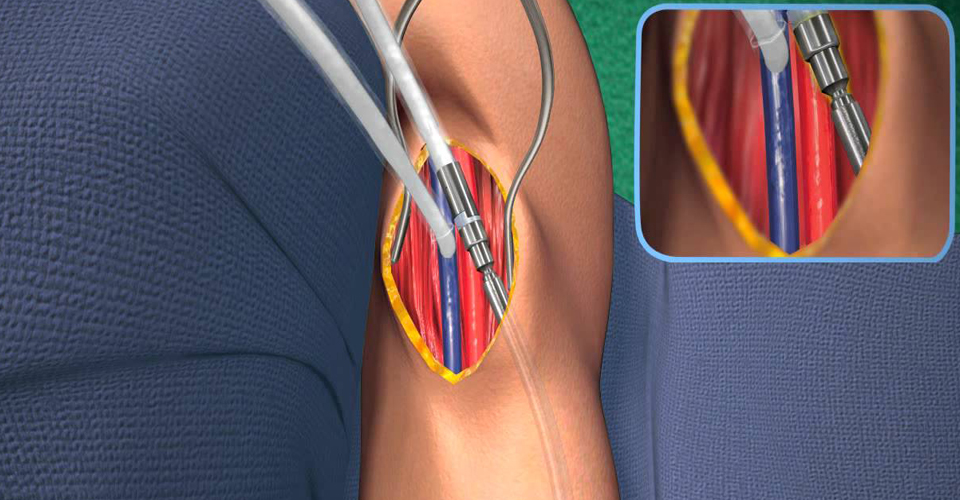 An AV fistula is a connection between an artery and a vein. For this procedure, an AV fistula is surgically created using an artery and a vein in your arm. (Your healthcare provider will let you know if another site is to be used.) When the artery and vein are joined, blood flow increases from the artery into the vein. As a result, the vein gets bigger over time. The enlarged vein provides easier access to the blood for a treatment for kidney failure (dialysis). This sheet explains the procedure and what to expect.

The first step in AV fistula creation is to evaluate your blood vessels (veins and arteries), to ensure they are healthy enough to support a fistula. The first step in the evaluation will be a physical examination of your arms performed by your vascular specialist. The next step will involve the use of non-invasive or minimally invasive tests such as ultrasound, and possibly an angiogram to determine the size and depth of your arteries and veins. These tests will determine whether or not your blood vessels are able to support an AV fistula. These tests are often referred to as “vessel mapping.” Once it has been determined that you are a candidate for an AV fistula, an appointment will be scheduled for the AV fistula creation. 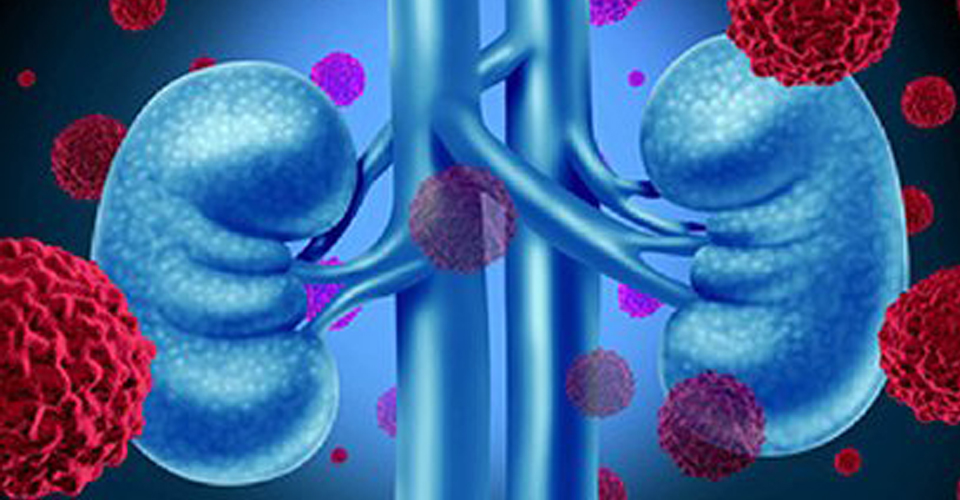 Urologic Oncology. This field is devoted to the diagnosis and treatments of tumors of urinary systems. Most importantly taking care of patients with prostate cancer, kidney, testicular and bladder cancer. Physicians that are trained in this field are called uro-oncologists.

The four disease process that it is involved on urologic oncology are as follows: 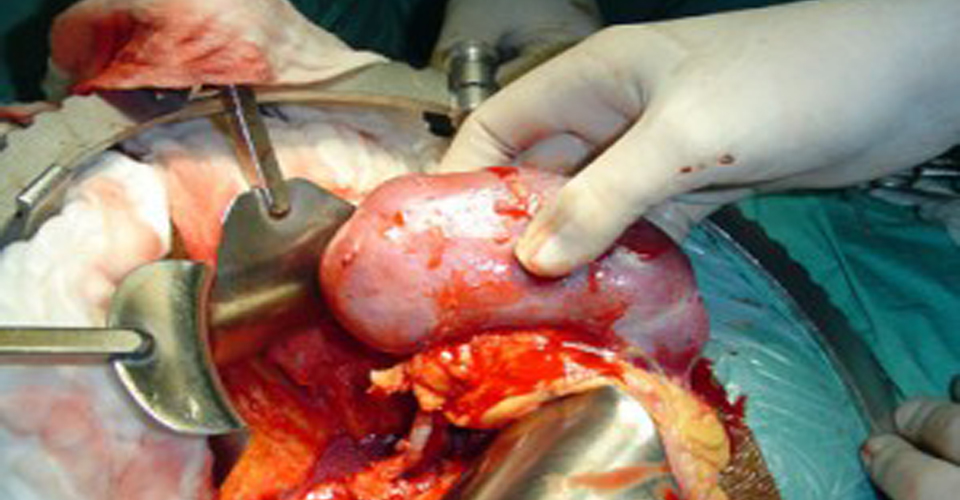 A kidney transplant is a surgical procedure to place a healthy kidney from a live or deceased donor into a person whose kidneys no longer function properly. The kidneys are two bean-shaped organs located on either side of the spine just below the rib cage. Each one is about the size of a fist. Their main function is to filter and remove excess waste, minerals and fluid from the blood by producing urine.
When your kidneys lose this filtering ability, harmful levels of fluid and waste accumulate in your body, which can raise your blood pressure and result in kidney failure (end-stage renal disease, which is also known as end-stage kidney disease). End-stage renal disease occurs when the kidneys have lost about 90 percent of their ability to function normally. 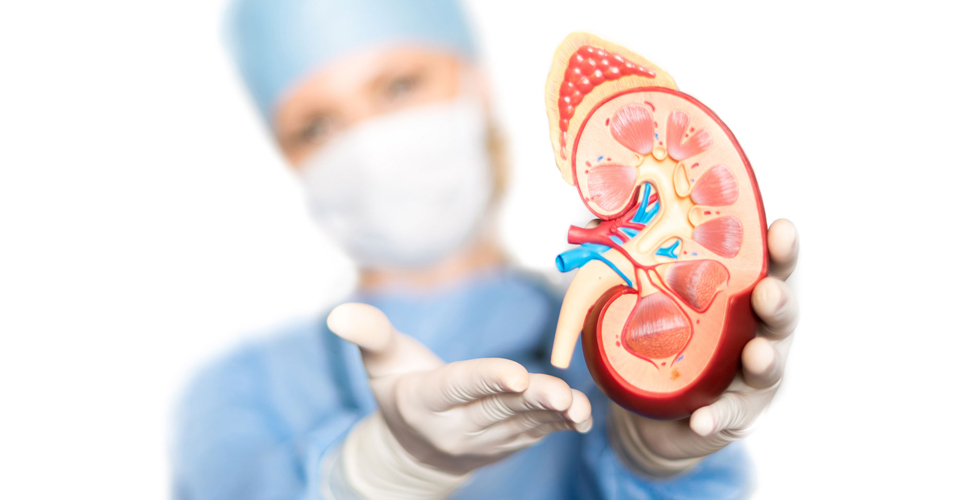 Reconstructive urology surgery can help patients with conditions such as birth defects, cancer, neurological disorders, male and female incontinence, strictures, scar tissue in the urinary tract organs, and pelvic floor prolapse.
Reconstructive urology can also help repair traumatic injuries to the kidney, ureter, bladder, and genitals. Traumatic injuries are often associated with pelvic fractures that can happen as a result of things like motor vehicle accidents or falls, and can often lead to scar tissue formation in the urethra. 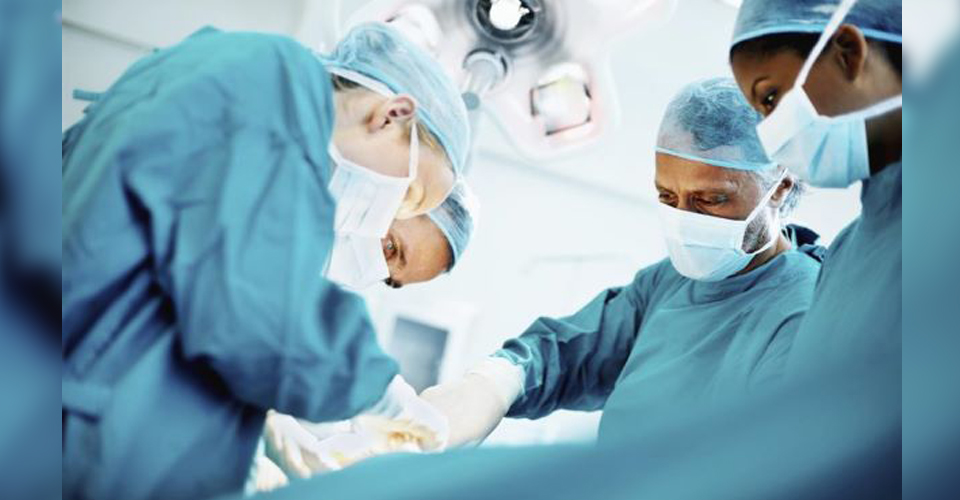 Urinary incontinence is the loss of bladder control which is a common and often embarrassing problem. The severity ranges from occasionally leaking urine when you cough or sneeze to having an urge to urinate that's so sudden and strong you don't get to a toilet in time. Though it occurs more often as people get older, urinary incontinence isn't an inevitable consequence of aging. If urinary incontinence affects your daily activities, don't hesitate to see your doctor. For most people, simple lifestyle changes or medical treatment can ease discomfort or stop urinary incontinence. 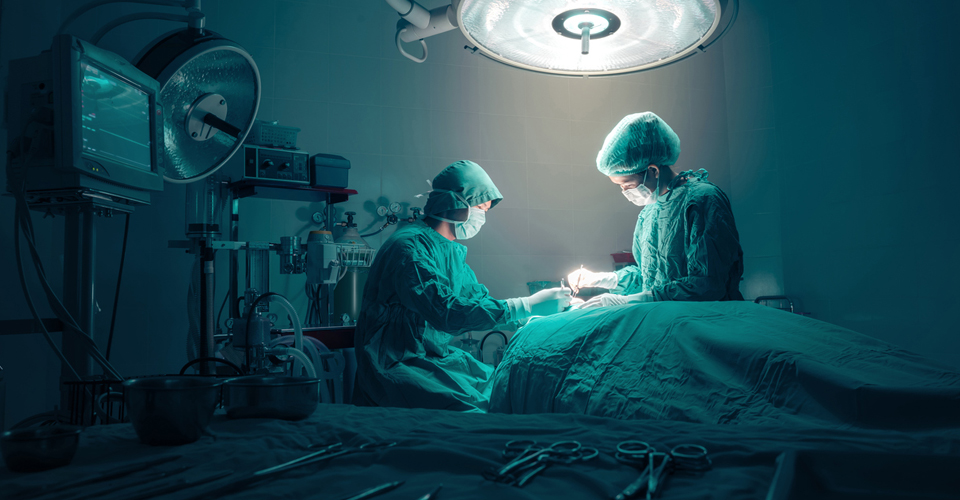 Urethroplasty is a surgical procedure where the urethra is reconstructed to treat various stricture problems. It is performed to remove the narrowed section of the urethra or to enlarge it. The procedure may also involve reconstruction of the surrounding tissues.
Urethroplasty is the repair of an injury or defect within the walls of the urethra. Trauma, iatrogenic injury and infections are the most common causes of urethral injury/defect requiring repair. Urethroplasty is regarded as the gold standard treatment for urethral strictures and offers better outcomes in terms of recurrence rates than dilatations and urethrotomies. It is probably the only useful modality of treatment for long and complex strictures though recurrence rates are higher for this difficult treatment group. 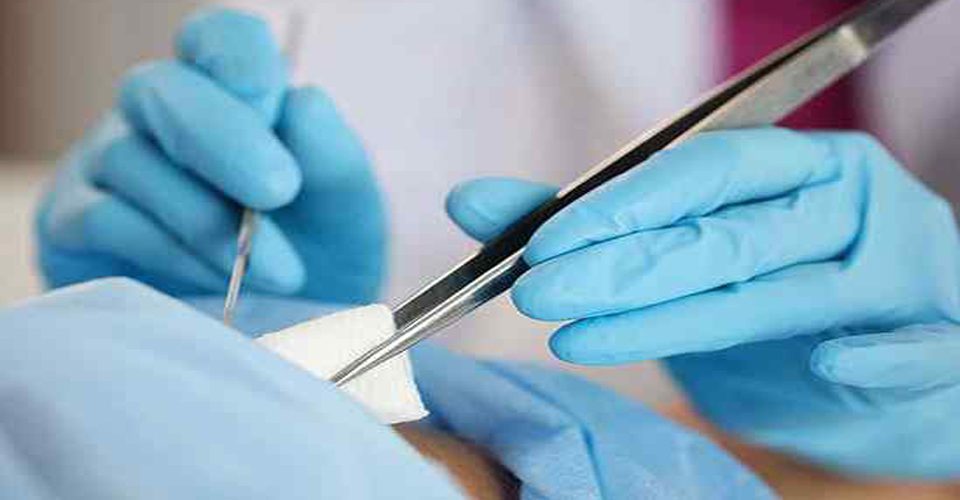 Percutaneous nephrolithotomy (PCNL) is a minimally-invasive procedure to remove stones from the kidney by a small puncture wound (up to about 1 cm) through the skin. It is most suitable to remove stones of more than 2 cm in size and which are present near the pelvic region. It is usually done under general anesthesia or spinal anesthesia
A retrograde pyelogram is done to locate the stone in the kidney. With a small 1 centimeter incision in the loin, the percutaneous nephrolithotomy (PCN) needle is passed into the pelvis of the kidney. The position of the needle is confirmed by fluoroscopy. A guide wire is passed through the needle into the pelvis. The needle is then withdrawn with the guide wire still inside the pelvis. Over the guide wire the dilators are passed and a working sheath is introduced. A nephroscope is then passed inside and small stones taken out. In case the stone is big it may first have to be crushed using ultrasound probes and then the stone fragments removed.

Ureteroscopy is an examination of the upper urinary tract, usually performed with a ureteroscope that is passed through the urethra and the bladder, and then directly into the ureter; usually the lower 2/3 of the ureter is accessible by this procedure. The procedure is useful in the diagnosis and treatment of disorders such as kidney stones. Smaller stones in the bladder or lower ureter can be removed in one piece, while bigger ones are usually broken before removal during ureteroscopy. The examination may be performed with either a flexible or a rigid fibre optic device while the patient is under a general anesthetic. The patient is usually free to go home after the examination. In pyeloscopy, the endoscope is designed to reach all the way to the renal pelvis (also called pyelum), thereby allowing visualisation of the entire drainage system of the kidney.[2] The endoscope can contain an instrument port which allows for introduction of laser fibres to fragment stones, and micro-baskets to retrieve stone fragments.[2] Kidney stones up to 2 cm in size can be treated by pyeloscopy 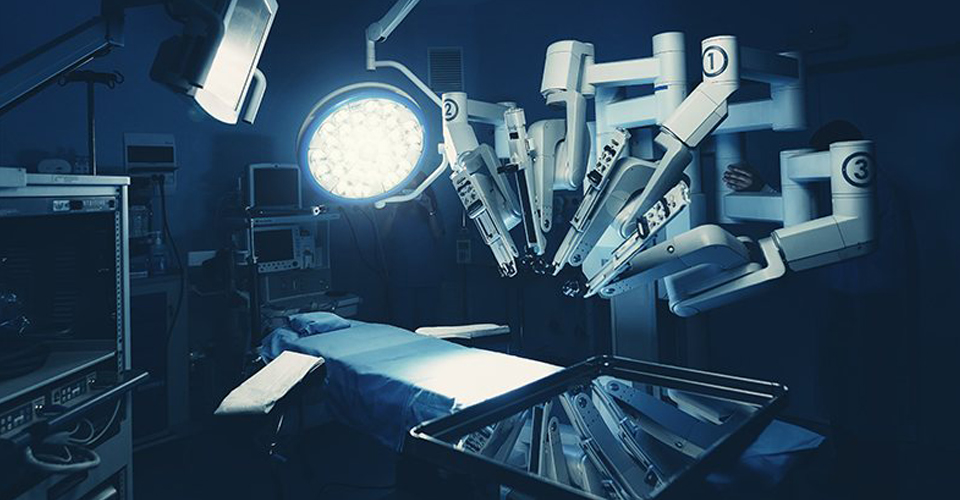 Retrograde Intrarenal Surgery (RIRS) : This procedure refers to surgery done inside the kidney with a viewing tube, better known as a fiber optic endoscope. Due to recent technological strides in this field, it has become possible to implement Retrograde Intrarenal Surgery (RIRS) to manage kidney stones. Using Retrograde Intrarenal Surgery Technology, this procedure can also be performed to remove kidney stones, which can be seen through the endoscope and later crushed or blasted using an ultrasound probe or evaporated using a laser probe or could be manually removed using a pair of small forceps.
This outpatient procedure is best done for patients suffering with kidney stones, narrowing of the kidney outlet within and outside of it and kidney tumours. This minimally invasive urology procedure is generally used for cases that are otherwise difficult to treat, such as :